The Guide below is a quick overview of the process for running an HSR election: 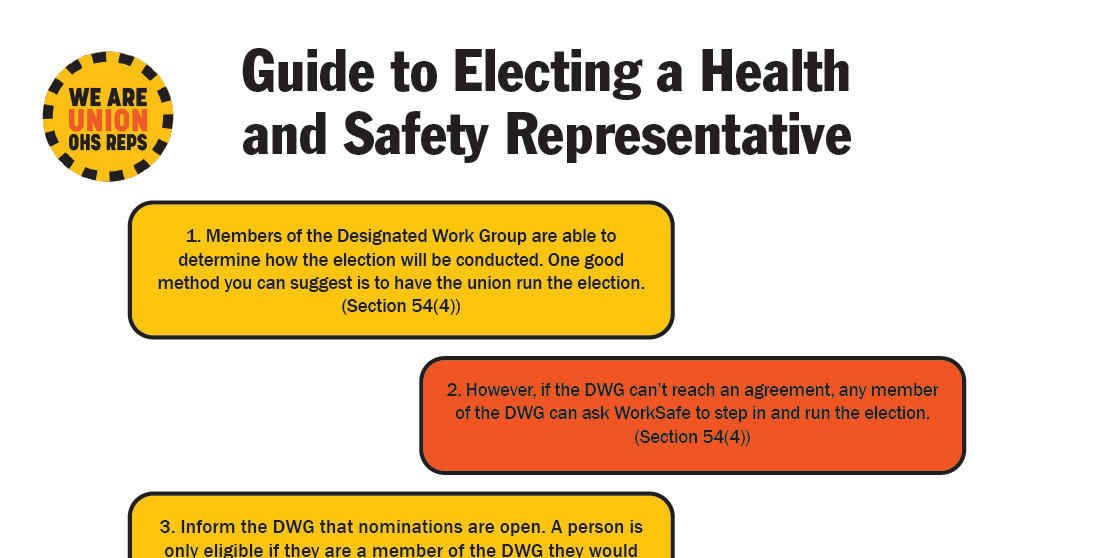 All members of a DWG are entitled elect an OHS rep, who must be a member of the DWG (and not disqualified from acting as a rep). Any member of the DWG may seek election as the rep - whether the person is permanent, full-time, part-time, or casual. [Note: prerequisite for reps - DWGs must be in place)

It is up to the members of the DWG to decide how to run the election (not the employer) - but if they cannot agree, then they can ask the Authority to arrange for an inspector to conduct the election (or appoint another person to do so). This can include someone from the union. The members of the DWG may decide to hold a meeting and then elect someone with a show of hands, or the election process may be more complex. They may also choose to ask their union to assist them in running the election.

Note: Section 54(6) of the Act says that if the number of candidates for election equals the number of vacancies, then an election does not need to be held and each candidate is to be taken as having been elected.

The term of office for reps is no more than 3 years, but they cease to be a rep if:

Reps can put their names forward for subsequent elections and be re-elected.

Note: Each DWG must have at least one elected rep. Under the 2004, when the DWGs are being established, there may be agreement regarding more than one rep per DWG and/or deputy reps (more information).

An employer can apply to have a rep disqualified to the Magistrates' Court on the grounds that the rep has exercised his/her powers - such as issuing a PIN or a ceasework - solely in order to 'cause harm' to the employer or the business. If the Magistrates' Court finds that the rep did in fact use the powers simply to cause harm and not for any OHS related purpose, then it may disqualify the rep either for a specified period or permanently.

As noted above, one of the matters to be negotiated during the establishment of DWGs is whether there will be deputy OHS reps in the DWGs. The provisions in the Act for the election, term of office, training and disqualification of deputy reps are the same as for reps.

If an OHS rep ceases to hold that position or is not able to exercise his/her powers (eg while on leave, or absent), then the deputy rep is able to carry out the role and functions (ie exercise the powers) of the OHS rep.

One of the main features of the OHS Act, since its initial introduction in 1985, is the powers of elected reps. Under Section 58, elected reps have the power to:

Under the OHS Regulations, reps also have the right to request a review of specific control measures the employer has implemented to eliminate/minimise any risk.

By exercising these powers, the rep is able to:

Under processes for resolving issues, reps also have the power to:

Important note: While the OHS Act gives HSRs rights and powers, s58(3) makes it clear that HSRs have no legal duties as HSRs:

"Nothing in this Act or the regulations imposes, or is to be taken to impose, a function or duty on a health and safety representative in that capacity."

While these powers are generally restricted to the rep's DWG, a rep may exercise these powers if there is an immediate risk in another DWG, or a member of another DWG seeks the rep's assistance, AND it is not feasible for the rep to refer the matter to that DWG's rep.

There are certain obligations that employers have to reps under Section 69. These are to allow the rep:

Both reps and deputies are entitled to attend an approved initial (5 day) training course when they are elected, and a (one day) refresher course each year they hold office. The rep/deputy must give the employer at least 14 days' notice. The employer must:

In the case of there being multiple employers, there is an obligation to share the costs.