This section contains background information from a range of different sources.  It is designed to give reps and other interested people some more in-depth information about what BBS is and some experiences of it:

4.1 Causes of accidents
4.2 Do these programs prevent disasters occurring?
4.3 DuPont's STOP safety program
4.4 An example of a Behaviour Based Program

The causes of accidents are many

Professor Andrew Hopkins1, related that the General Manager of DuPont Australia told him in an interview:

Dupont is correct in that safety is not simple; but their conclusions are incorrect. The Dupont way focuses on just one part of a "chain of events" that can lead to an accident. Accidents and negative health outcomes have many causes. Dupont does not mention health at all, just safety.2

Notes
1: Paper presented at an ACTU conference on Behaviour Based Safety, May 2005
2. See Section 4.3 on DuPont's safety and environment record in the United States

Where do the statistics come from?

The statistics (that 80 - 96% of workplace injuries are caused by workers' unsafe behaviours) stem from "research" conducted by an insurance investigator named H.W. Heinrich in the 1930's in the United States. Heinrich's "research" consisted of reviewing supervisors' accident reports and drawing conclusions about accident causation from those reports. Most of those reports blamed workers for the accident. Heinrich concluded that 88% of all workplace accidents were caused by workers' unsafe acts.

The union approach, and that of modern OHS regulations, is to use the hierarchy of control i.e. from the best or most effective way of getting rid of the risk, elimination, through to the worst or less effective method, the use of safety gear (see diagram, below). And of course any combination of these, as the cause of accidents and ill health will have many contributing factors (multifactorial). 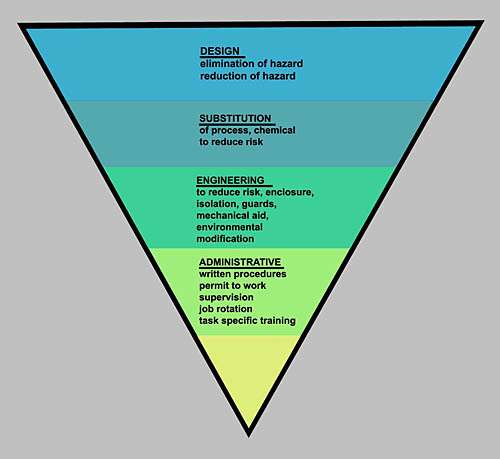 Blaming those with the least say

Although the supporters of BBS programs say they do not "blame workers" this is what happens if you do not ask  "why " someone did what they did. By asking "why" we can trace the chain of events and reasons that lead to workers being exposed to risks.

When we begin to ask why the behaviour occurred we move back along various chains which invariably implicate management.  Just as the great majority of accidents can be attributed to unsafe behaviour by front line workers, the great majority of accidents are at the same time attributable to actions or inactions by management.  An example will make the point.

A worker descending a set of stairs, falls and is injured.
Why did he fall?

He was not using the handrail, as he was required to do by company policy.
Why not?

He was using both hands to carry tools.
Why?

If he used one hand to hold the rail he would have had to make more than one trip up and down the stairs to get his tools to the lower level.
Why didn't he do this?

Because there was pressure from the supervisor to get the job done quickly.

Production pressures routinely lie behind unsafe actions by workers in this way.  Despite all the company rhetoric about putting safety first, the experience of many workers, not all, is that production takes precedence over safety.  But we can go further than this.  The failure to use the handrail is not the only reason the worker fell.

He fell because the stairs were too steep, far steeper than would be acceptable in the building code for houses, for example.

Why were they so steep?

Because the designers had not considered the hazards of steep stairways.

Why had the designers not considered this hazard?

Because they had not adopted the philosophy of designing out hazards at source.
Why not?

Because the regulator was not enforcing the relevant regulations.

This example could easily be developed further, but this is far enough to demonstrate the truly multi- causal nature of every accident.

4.2 Do these programs prevent disasters from occurring?

These  programs would  not have  stopped:

In its March 2004 research report titled "Irresponsible Care", the US Public Interest Research Group (US PIRG), a non-profit, non-partisan public interest advocacy group, analysed data compiled by the National Response Centre (NRC), the sole national point of contact for reporting oil or chemical discharges into the environment.  The NRC database includes every accident and incident reported to the agency.  From the time period of 1990-2003, DuPont ranked number three overall in accidents with 2,115-nearly 150 a year1!

DuPont is one company that sells a safety program called STOP.  Here are some examples of DuPont's behaviour, USA.

Sulfuric Acid Leak
DuPont was issued four citations for the October 11, 2004 leak of hundreds of pounds of sulfuric acid into the ground, water and air at its Wurtland, Kentucky facility2.

DuPont was cited for:

Meanwhile, DuPont faces several lawsuits from residents who claim the October spill made them sick.  More than 75 residents of Greenup County have filed lawsuits in federal court against the company.  Many of the people who claim they now have breathing and vision problems are first responders – fire, police and ambulance crews who evacuated people near the plant3.

In July 2003, the Justice Department and the EPA reached a $1.1 million settlement with DuPont in connection with Clean Air Act violations involving a May 1997 chemical release from DuPont's fluoroproducts plants in Louisville, Kentucky.  DuPont was unable to contain or block the release for approximately 40 minutes.  During that time, approximately 11,500 pounds of hydrogen fluoride, escaped into the air.

The escaping hydrogen fluoride formed a toxic cloud of gas which migrated from the facility.  As a result, several nearby chemical manufacturing plants were shut down and evacuated for several hours, and local public health and safety officials directed nearby residents and school children to stay indoors until the public health threat from the hydrogen fluoride abated.

DuPont was one of four companies that were sued by 13 workers injured in a fire at the Malden Mills factory, Lawrence, Massachusetts.  The blaze, which swept through the Malden Mills complex on December 11, 1995, levelled four buildings and injured more than 30 people.  It was one of the largest industrial fires in history.  DuPont supplied material that fire investigators believe may have sparked the inferno.  The case was settled December 13, 1999 for an unspecified amount4.

In 1981, DuPont began a study that showed 2 out of 8 Washington Works female workers had children with birth defects similar to those found in rats in another study5.

In 2004, EPA sued DuPont for hiding both studies and evidence of drinking water contamination6.  3M stopped making APFO based on principles of "responsible environmental management" causing DuPont to manufacture APFO itself.  Now, the EPA, communities around DuPont plants and consumers are concerned about the toxicity of a chemical that makes Teflon, a product that once provided so much convenience.

DuPont Does Not Tell the EPA or Communities
On or about June 14, 1984, DuPont also found C8 in West Virginia and Ohio tap water near the Washington Works plant7,   the same plant where Teflon is made and female workers had children with birth defects.  DuPont disposes of waste from the plant in the Dry Run Landfill.  Until recently, the landfill was unlined and polluting the soil, ground water and drinking wells with C8.  Not until a local farmer sued DuPont for polluting Dry Run Creek and killing 280 cows in 1999 did the community begin to learn the extent of its drinking water contamination.  Even through levels exceeded DuPont's original "community exposure guideline" of one parts per billion (ppb), the company did not tell residents or the EPA about the contamination for up to 20 years8.

Residents in neighboring communities now drink only bottled water, as per the suggestion of a Pennsylvania scientist9.    (Water purchases are reimbursed by DuPont.)  Residents await more studies to determine if a link between disease and the C8 contaminated water exists.  If it does exist, DuPont will have to pay $235 million for medical monitoring as part of the settlement of a class action suit brought about by 50,000 to 80,000 residents10.    DuPont has already paid $107.6 million as a result of the settlement.

But, like in the above cases, the scientific community is finding reason to believe C8 is hazardous to our health.  Testing of workers, who once made the chemical by 3M, found workers were more likely to die or seek treatment for cancers in the reproductive tract and have weakened immune systems11.    DuPont disagrees there is evidence C8 may be toxic to humans, although the company concurs with the EPA that it is toxic in animals.  DuPont writes there are no health effects even in workers who have "significantly higher exposure levels than the general population."12   Yet, DuPont has announced it will reduce its use of C8 in Teflon products and reformulate telomer products, such as those that go on our clothes and carpeting, by the end of 2006.

4.4 An example of a Behaviour Based Program

This example is from a large Australian employer, with thousands of employees.  The information below is what was handed to supervisors to implement in their work sections.  Supervisors are asked to issue cards to workers about their "safety behaviour".

The entire Kit can be downloaded as a pdf document here.

What are 'Behaviour Based Safety' Programs?...read more

If your employer is looking at introducing these programs – what can you do?...read more

This section has a number of exercises that will help you and the members make some judgements about Behaviour Based Safety Programs....read more

Where to go for more information and resources on Behaviour Based Safety Programs...read more