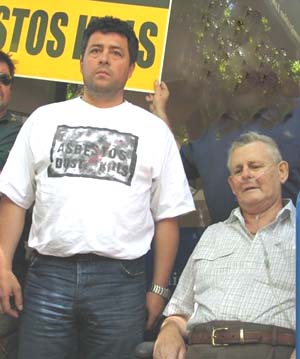 Tony arrived in Australia from Chile with his family in the 1970s.   His first job after leaving school was removing asbestos.   At that time, regulations for the safe removal of asbestos were lacking - leading to many workers being exposed to lethal asbestos fibres.  Tony lost his life because of this.

In 1998, when Tony worked as an Organiser for the then Building Workers Industrial Union, he was involved in campaigning for the introduction of better asbestos removal regulations.   Later he donated his time to the CFMEU Training Unit in instructing on the safe removal of asbestos.

Despite his diagnosis with mesothelioma in 2007, Tony continued to campaign on asbestos related matters and for asbestos victims.   Alongside Bernie Banton, he successfully campaigned for the chemotherapy drug, Alimta to be listed on the Pharmaceutical Benefits Scheme, allowing it to be available to all mesothelioma sufferers.   He is seen in the photo on the left, with Bernie at the rally outside the office of the then Health Minister, Tony Abbott.

As part of this campaign, and to urge WorkSafe Victoria to amend Victorian Asbestos Regulations to include "dust" in the definition of "friable asbestos", Tony spoke at the 2007 VTHC Annual OHS Representatives Conference. Tony was also special guest at the Ballarat and Melbourne seasons of Donna Jackson's production of Dust in November 2008, as well as a contributor to the show.   Dust deals with the effects of asbestos on individuals, families and communities as well as the history of use of asbestos by companies such as James Hardy.   Tony was awarded life membership of the CFMEU in December 2008.

He will be missed by all who have known him, worked with him, campaigned with him and been his friend or comrade.   Our condolences to all his family at this time.