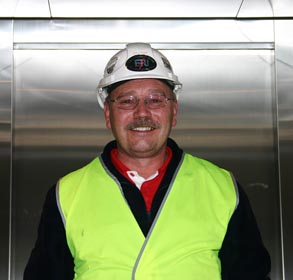 Derek Jones is one of the joint winners of the 2008 OHS Rep of the Year. We spoke with him about winning the award and some of the important lessons he has learned over his six years as an occupational health and safety rep. Derek works at the OTIS Elevator Company in South Melbourne and is a roving rep. He works closely with his colleagues and management to advocate for improved standards in his own workplace and across his industry. He has worked hard as a rep to establish relationships that allow for the open discussion of OHS issues and has had great success in working cooperatively to deliver safer standards.
_______________________________________

Tell us about yourself and where you work.
I work at OTIS Elevator Company in South Melbourne and I’ve been the Health and Safety Rep here for nine years. I’m an ETU member. I was first elected in 1999 and I’ve been re-elected three times since then. At the moment I have about 74 people who I’m responsible for. The company is offering redundancies at the moment so that’ll probably go down to about 60 or so.

I’m a roving rep, which works really well. I’m able to visit sites all around where the members are. It means I can go into a site and look at a problem and it takes the heat off the workers. Blokes ring up from all around the place to tell me something’s up, so then I can go out and have a look.

How supported is the role?
The Victorian Management has been very supportive of the role. In the beginning there were some hard times but we’ve built an understanding about how the role works. The bloke in management I deal with most is Chris Cahill. He has been very supportive, which is worth recognising. We have some verbal stoushes – the occasional “ding-dong” – but we can both listen, which is absolutely crucial for health and safety. We don’t always agree but we’ve both got the maturity to admit when we’re wrong.

We’ve got a good team of people who I’ve got to acknowledge for the work they do and I couldn’t have won any award if not for them. John Parker is the OHS Rep for the AMWU – Metals and if I get called out to a place where there’s any issue to do with that I let him know about it. And Tim Stephenson, the ETU WorkSafe Officer has been a great help.

How did you become a rep?
I became a rep back in 1999, but I became a roving rep six years ago. I was working on a major building site at Docklands when management approached me with the offer to become a roving rep. They saw the work we were doing and told me, “ We don’t just want one site to be safe, we want all our sites to be safe.”
Now if there’s a safety issue on a site the onsite OHS rep can call me up and I’ll go out and have a look. It took a few years of being militant and pushing things around but eventually we’ve made some real gains.

What training have you received?
I’ve done everything I can do. I did my initial training at the Plumbers Union on Victoria St nine years ago. Since then I’ve done the ETU OHS Reps course and all the refresher training. I also sit on the ETU OHS Committee which keeps me free to maintain the contacts that are required to do this job properly.

What are the major health and safety hazards you and your members face?
Falls from heights is the number one concern we have in the industry. I worked with Victorian management of the company to engineer new procedures to reduce hazards.
One of the best achievements in terms of a safety measure was the introduction of extended toe guards around the false cars which we use in the lift shafts. The extended toe guards prevent anyone falling off the false cars from going underneath.

What advice would you give to other safety reps?
If you’re taking a job as a rep thinking it will make bulletproof, think again, because you’re always in the firing line. It is a tough job and a constant battle and can very hard going. You’ve got to be able to work with people. If you don’t have the support of your members and your union and even the management – then you’re dead in the water.