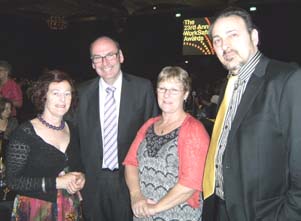 Renata was able to catch up with Marg by phone and asked her a few questions.

So what makes a great HSR?

1 - How long have you worked at Nestle Uncle Tobys manufacturing facility in Wahgunyah?
I've worked at the Nestle facility for fourteen years.

2 - How long have you been an HSR and why did you take on the role?
I was elected HSR in 2001 for the LeSnak DWG - that's just on ten years. I am now also the Chair of the Site Safety Committee and I organise the training of other reps on site.

I think the reason I was nominated in the first place is that I think outside the square and if I see anything around the place that I think needs addressing, then I'll go for it.

In the past twelve months or so, I've also taken on coaching and mentoring other HSRs. On top of this, I'm a representative on the first aid committee write the safety newsletter "NUWs"  - which contains information on health and safety at work, what the delegates are doing and also general safety information I think workers might be interested, like snake alerts and the dangers of bbqs in summer.

I'm a member of the fairly new Nestle Oceania SHE Council, which I've found very rewarding - it means getting together either by phone or at face to face meetings, where we discuss what's going on at Nestle around Australia and New Zealand.

3 - What did you think when your name was read out at the Awards Dinner as HSR of the year? What was your initial reaction? I was very surprised as I didn't think I would win, but it was a fabulous experience... I was pretty stoked! Those who were at the Awards Night will have seen that I was nervous, shaky and had quite a hard time speaking at first. But it was great and now I'm thinking 'How can I use this Award ...?' 4 - What are some of the hazards and risks faced by the members of your DWG?
When I first started as HSR, there were a lot of manual handling issues, and this was our biggest problem. However, we have been working towards eliminating these, and I'm happy to say that we're very close to achieving our goals here.

We also had a big problem with the Colby conveyer merge point. The conveyor used to block up regularly, and workers would have to climb up, lean over, and poke a stick into it to unblock it. There was a very real and serious risk of the person falling from a height, as well as posing a risk to those passing underneath it.

We've addressed both the causes of the blockage, so there are now much fewer of them, and we've built a walkway over the top of the conveyer merge point, which means that whenever there is a blockage, it's much easier to reach and to clear.

5 - What do you think you've been able to achieve during your time as HSR? And how did you manage to achieve these things?As well as the things I've mentioned above, I think that being a rep for so many years has made lots of other people more active. There are three separate plants at Wahgunyah - one is mainly admin, then there's the 'snacks' and the 'cereal' plants. There are 28 elected HSRs across the three plants; we each have our own regular OHS meetings, and then once a month we have a joint meeting.

6 - What have been some of the difficulties you have encountered as HSR? How did you tackle these difficulties? Have things improved or deteriorated?

I would have to say 'it's management'! Not now, but certainly in the beginning, when I first became an HSR, I found there was a lot of negativity and it all came from management! Things have certainly changed - we've changed how we communicate with each other, and health and safety is much more important and taken much more seriously now.  There has also been a change in some of the management people - and the newer ones are much more in tune with OHS - this has been the case particularly in the past five years, so things are much better now.

8 – Do you think receiving the award is going to make a difference to your role as HSR? Will it make it easier or harder? Why?

That's a hard question to answer... I think that maybe some people, for example contractors, might now think 'Oh, she must know what she's talking about - she's won an award!' Also, I hope that winning the Award might help me to encourage some of the younger workers to put their hands up as HSRs.  If I can show them that there's real satisfaction in getting improvements made, and that our efforts are recognised, then more of them will become active.

9 – What have you found most useful in terms of being an effective HSR?
The union has been very supportive since the very beginning. This was especially the case when I first started and had some problems with the previous management. We've had the union come in and visit the site, so that could see first hand what we do, how we work and what some of our issues are.

The other great thing has been the increase in support from management. In the past few years, I find that management's confidence in me as an HSR has increased to the point that in some areas they have given me a level of autonomy to go ahead and get things done without having to go through hoops.