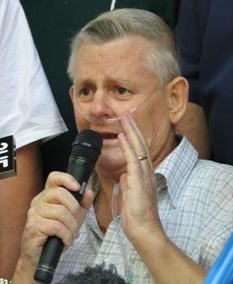 The tireless anti-asbestos campaigner passed away peacefully in his sleep at 1am Tuesday November 27, 2007. He was 61. Ironically, Bernie's death coincides with Victoria's Asbestos Awareness Week.

Bernie Banton became the face of the union campaign Make James Hardie Pay for the treatment and support of asbestos victims throughout the country.

Mr Banton was a proud member of the AMWU and worked closely with unions on the ACTU campaign. Even after reaching a settlement with Hardie's he continued to speak out and support other sufferers in receiving fair compensation from the company.

He campaigned right up until his death to see justice for asbestos disease sufferers, most recently shaming former Health Minister Tony Abbott into fast-tracking approval of the mesothelioma treatment drug, Alimta.

He was honoured with a State funeral at Sydney's Acer Arena on Wednesday 5 December, which over 2000 people attended.  At the funeral, Prime Minister Kevin Rudd said that Mr Banton had become a symbol of basic human decency. "Bernie Banton was a great Australian hero," Mr Rudd told the mourners. "A hero in an age when we had all become so cynical that we didn't believe there could be heroes. He was an Australian hero with an extraordinary heart who lived an extraordinary life.'

Greg Combet, previously Secretary of the ACTU and now a Labor member of parliament, who worked with Mr Banton in the James Hardie compensation campaign, said that, without him, the company might not have been brought to account. "Without Bernie, there may have been people with asbestos diseases today who would not have access to compensation," Mr Combet said. "Bernie had a rare capacity, a capacity to connect with people and to inspire in them the same passion for justice that he himself felt and he moved the Australian community."

Mr Banton has been described by friends and colleagues as a true Australian hero for his contribution to setting up the fund to compensate victims of asbestos.

Bernie Banton worked for James Hardie's Industries in the 1960s and 70s where he was exposed to asbestos daily. He had lived with asbestosis and asbestos-related pleural disease for many years. In August this year he was diagnosed with mesothelioma, to which he finally succumbed on Tuesday morning.

"Bernie Banton was a tireless campaigner for those suffering asbestos diseases. His example will live on and his legacy will be the great success he had in holding James Hardie and its directors accountable for their actions."

At a commemorative service held during Asbestos Awareness Week on Tuesday Novemeber 27 for those whose lives have been shattered by asbestos diseases, friends spoke of his larrikin spirit and disdain for authority, and most of all his tenacity in the face of adversity.

Mr Banton had been invited to attend some weeks ago. He said he'd try.

"Bernie was a fighter. He fought all his life. He fought for us all and he was an inspiration to us all. A father, a brother, a grandfather, a husband, a family man and a union man. A strong man."

Lawyer Peter Gordon, who met Mr Banton during the campaign against James Hardie in 2004, said he was indefatigable in his desire to see the company held accountable.

"If there is such a thing as a true Australian spirit, I think Bernie embodied it and that's why so many of us identified with him," he said.

"No one articulated the case as to what Hardie's had done and the outrage people felt better or more succinctly than Bernie Banton did. And it wasn't a role anyone chose for him."

"He elected himself to that role and became an enormous asset to the campaign."

Bernie Banton came to national prominence during the union campaign to hold James Hardie accountable for the production and use of asbestos products.

He became the human face of the campaign, a real person suffering a real illness speaking about real issues. Whilst legally the company had protected itself by moving offshore, morally they could not withstand the intense scrutiny and public outrage that Bernie Banton personified. The company finally reached a settlement, with the ACTU, NSW government and asbestos support groups setting up a $4 billion fund to compensate asbestos victims.

Bernie Banton's legacy as a powerful advocate and strong voice will not be forgotten.  He fought for justice for the victims of asbestos - and the fight will continue.  Both the VTHC and the ACTU have passed resolutions to ensure this (see the ACTU Asbestos/Bernie Banton Resolution)