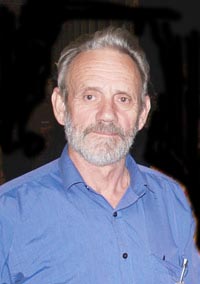 Mr Greg Tweedly, Chief Executive of the Victorian WorkCover Authority made the following presentation to Pat during the WorkSafe Awards dinner, on November 27, 2005

Pat Preston is well known throughout Victoria’s construction industry as the previous long-serving Manager of the Construction Forestry Mining and Energy Union’s OHS & Environmental Unit,  and he is widely respected for his passion, untiring work and achievements in the cause of construction safety.

Patrick George Preston started life in grim and dangerous times.  He was born during an air raid on London’s Paddington in December 1940, when night after night the Third Reich’s Luftwaffe was pounding the British capital’s East End.

He left school at 15 to serve in Britain’s Royal Navy for the next 10 years. Then, like many of his fellow Britons at the time, Pat migrated to Australia in 1966.

He quickly found work on Melbourne’s building sites, moving from job to job as the work ebbed and flowed.  Those were the days when building workers were hired on the spot and fired with an hour’s notice or an hour’s pay in lieu of notice.  Pat talks about one year when he submitted 13 Group Certificates, each from a different builder, with his taxation return. In 1968, Pat got a start with John Holland Constructions on the best and biggest project in Melbourne at the time, the construction of the West Gate Bridge.

As most of us here will know, the West Gate Bridge was the scene of Australia’s worst industrial disaster.  At 11.50 am on 15 October 1970, one of the bridge’s 112 metre spans collapsed during construction, killing 35 workers, injuring many more and changing countless lives forever.

One of the survivors was Pat Preston, who was a couple of metres from the hoist cage when the collapse occurred.  Helping his injured workmates to get medical assistance and attending the funerals of those who were killed over the following weeks, changed Pat forever, and laid the foundations for his tireless work in OHS in construction; work which Pat continues to this day.

Pat went back to work on the bridge when construction resumed in 1972.  After the bridge was completed in 1978, Pat was taken on by the FEDFA as an Industrial Officer, and he later became the Union’s Victorian Assistant Secretary.

Towards the end of 1988, he moved over to what is now the CFMEU’s Construction & General Division as an OHS Officer.  He has, for many years now, been the Manager of that Union’s OHS & Environmental Unit.

Many of the OHS initiatives now entrenched as the accepted standard in the Victorian commercial construction industry bear the unmistakable fingerprints of Pat Preston. And you don’t have to scratch the surface too far to make the connections back to his direct experiences on the West Gate Bridge.

In addition, Pat has been a high profile and tireless campaigner around asbestos issues in industry and the community generally and his name is synonymous with action on  this issue in construction.

And there are other things about the way Pat operates that reveal the indelible mark of the experiences of his working life.  There would hardly have been a commercial construction fatality anywhere in Victoria that has not instantly brought Pat to the site. He is there for the survivors, he is there for the families, and he is there to respect the dead.  But he is also there to work with the decision makers to try to prevent these tragedies from happening again. 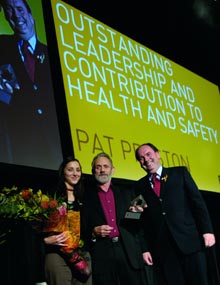 The awards judging panel comprises representatives of employer organisations, employee organisations and independent experts as well as WorkSafe.  The panel members were unanimous in their support of this award to Pat.  As one employer representative put it, employers may not always agree with Pat about the detail – but there is no doubt of his commitment and integrity and there is general affection, respect and regard for him across the industry.

Every month, Pat chairs a meeting of over a hundred workers’ Health & Safety Representatives.  These men are not shrinking violets and when they have a concern, they demand and expect action.  And Pat is their spokesman, their champion and their leader in taking up their issues with the builders, with the sub-contractors, with WorkSafe, or whoever else he thinks needs to listen.

On 23 April 2003, when the Australian Commonwealth Government announced the names of those Australians honoured with its Centenary Medal, it was only fitting that one of those names was Patrick George Preston.

His medal citation reads:  “For service to health and safety in the workplace”.

The WorkSafe Victoria Awards judges now join in honouring the contribution of Pat Preston to health and safety in Victoria.

Few people can reflect as Pat can on a career that has had such a positive impact on the working lives of so many – and it’s not over yet – Pat’s contribution continues.  I know I speak on behalf of so many people to whom Pat’s work has made a difference – some of them are here with us tonight and there are even more who can’t be here – when I say thank you and congratulations.

The VTHC OHS Unit congratulates Pat on receiving this well-deserved award, and wishes him continued success in his work in occupational health and safety.

POST SCRIPT September 2012: Pat has now 'retired' and has left his position at the CFMEU. However, he is still very active, particularly in his work around the issue of Asbestos.