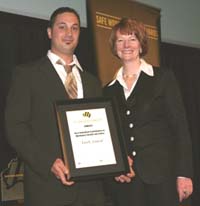 Congratulations to Tarek Soueid who was awarded the Health and Safety Representative of the Year for his work at Woolworths’ Hume Distribution Centre. (He is pictured here with Julia Gillard, Deputy Prime Minister, at the National OHS Awards in Canberra in 2008 where he was a finalist)

He represents 17 employees at the centre, has shown an extraordinary willingness to ‘raise and persist with issues through to resolution’ and has played a key role in devising and flow-charting a new site wide OHS consultative structure.

Tarek is a NUW member and has been an OHS Rep for eight years and in that time has worked hard to build a culture that recognises health and safety as a crucial part of the workplace.

He spoke to SafetyNet about his experiences.

1. Who are you? Where do you work?
My name is Tarek Soueid and I work at Woolworths Hume Distribution Centre in Broadmeadows.

2. When did you become a safety rep? What made you take on this role?
I’ve been a Health and Safety Rep for the past eight years. I took on the role as OHS rep because there was a need for it at the site. I just noticed that there were things that needed to be done. Originally there were three reps on the site and now there are 15 in a workforce of about 600.

3. What training have you received?
I’ve done quite a bit of union-based training. The NUW training has been very good. Union training actually focuses on what you need to know to be able to do your job as a rep.
Early on as an OHS rep I did an employer group based training course which was nowhere near as good.

4. Where do you get your support?
The NUW have been very supportive. The union is great and have worked very closely with us. Also my colleagues at work are a great support. That’s really important. At work, unless everyone on the floor is pushing for it you don’t get any change.

5. What are the major health and safety hazards you and your members face? The main hazards we face are from manual handling and mobile plant. We work with cartons, boxes and pallets and there are forklifts around so there are a lot of different issues to keep an eye on.

6. Why be a safety rep?
Way of making the workplace safer. It helps everyone out. It’s also a really great learning experience.

7. What are your most satisfying accomplishments as a safety rep?
Reducing injuries and introducing programs to help injured workers get back to work. We’ve got a return to work program in place with a coordinator.
Also changing management culture has been a big success. It has taken lots of hard work to get everyone to sit down at the table and talk but it has been satisfying to do so.

8. What was your worst experience?
There was a lot of confrontation between management and reps early on. It was like going against a brick wall whenever issues were raised.
Now there’s a lot more cooperation and we can work through things.

9. What advice would you give to other safety reps?
Hard work, persistence and patience pay off in the long run. It takes those things to build a relationship between workers and management. Raising a community around health and safety is really important. The more people you have involved the easier it is to build awareness and support for safety.

10. Is there anything else you would like to add?
It can be a very hard sell. You need to be persistent and prepared to stick to your position. The help we got from the union was great. The people at the NUW were very supportive. So talk to your union if you need help.