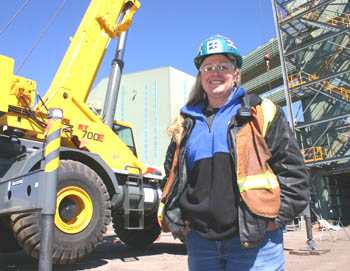 At the 2006 WorkSafe Awards Brodene Wardley was nominated Occupational Health and Safety Representative of the year.  Brodene is a CFMEU member who believes that standing up and speaking out are very important on sites like the one she worked at: the Hamilton Sands Project.
She kindly answered some questions for SafetyNet.

My name is Brodene Wardley, and I worked on the Hamilton Mineral Sands Project in the Western Districts until 3 weeks ago (mid November) as a Crane Operator and Rep.  I am now heading up to Moomba in South Australia for a few weeks where I will be operating a crane . Then as for next year, I will open that door when it gets here.

2. When did you become a safety rep? What made you take on this role?

I becamea safety rep early last year (2005): the site was new and the need for a rep was prevalent. I put my hand up and was voted in. If my next employment has room for a rep then the possibility of doing it again will always be there.

3. What training have you received?

I received the 5-day training course held in Melbourne by the CFMEU in August 2005. I found the course very informative and the teacher always was able to answer questions in laymens terms.

4. Where do you get your support?

Support comes from many areas, the other reps on the site, the union and of course WorkSafe.

5. What are the major health and safety hazards you and your members face?

The major issues we had to face on the site were working at height, which at times became a nightmare but with guidance and training both for the members and management we were able to gain a higher standard in height awareness.

Then there is the confined spaces, I feel that this will always be a contentious issue on any site unless guidelines can be set more clearly.

Being a safety rep helped me personally to gain more knowledge of hazards within the construction industry but more obviously to ensure a safer working environment for all the workforce regardless of trade.

7. What are your most satisfying accomplishments as a safety rep?

Knowing that while being a rep I have dealt with issues to the best of my ability and listened to my members needs and that during the construction phase of the project we had no major/serious LTI's and that is a big plus on any site.

8. What was your worst experience?

Everyone's a rep!!  What I mean by this is that no one seems to want to do the job, but when someone does there are always people who willcriticise the way in which that person is handling the job. It is not an easy role to take on and I have found a few whingers … but the offer of the seat soon sorts them out and yes we do have to learn to take some criticism but not the cynicism that is at times portrayed.

9. What advice would you give to other safety reps?

Listen to your DWG

Always do your job to the best of your ability

Gain as much information about any issue before consultation, do your homework

Hold regular toolbox meetings to allow issues to be disgussed

10. Is there anything else you would like to add?

Things are becoming tougher within all industries across Australia, The need for more reps to stand up is definitely there.

I did stand up, even though the butterflies in my gut kept wanting me to sit down. I had no idea what I was getting into other than I felt strongly enough about safety and saw the need for a safer working environment within the construction industry which is one of the most dangerous industries in the world. If I can do it, so can you!!