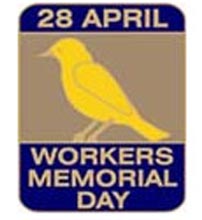 Workers Memorial Day (WMD) is an international day that unions, workers and their families and communities around the world join together to remember those who have been killed or injured at work, and to fight for the living. Each year an international theme is chosen

The IWMD ceremony at Trades Hall this week was a moving one: the many people in attendance listened silently as 20 pairs of boots and shoes, including a pair of baby booties, were placed on stools on the lawn outside the Hall, each in memory of a person killed at work since April last year. Hearing of the circumstances of each death, and the age of the deceased, and seeing the pair of boots placed on the stool, had a very sombre effect.

Luke Hilakari, VTHC Secretary, asked we remember the 2.3 million people killed around the world, the 600 Australians killed by mesothelioma – and the role of unions in making workplaces safer.  He reminded those present that for each person killed there are family and friends who will be forever affected.

Robin Scott, Minister for Finance (and responsible for WorkCover), attended and spoke. He was accompanied by Natalie Hutchins, Minister for Industrial Relations.  The Minister reaffirmed the government's commitment to improving health and safety in Victoria's workplaces, and announced that in addition to an imminent increase of inspectors - an extra 21 by May, there would be a further two intakes this year.

Also in attendance were representatives from WorkSafe Victoria. Acting Chair John Walter and Acting Chief Executive Clare Amies joined Minister Scott in laying a wreath at the workers' memorial. Ms Amies said that all Victorians deserved to go home safe at the end of every day, and any work related fatality was unacceptable.

Workers Memorial Day was started by Canadian Unions in 1984. By 1996, it was an international day. Australian unions have marked the day since 1997.

In 2004 Victorian Unions adopted the canary as the symbol of this day (first adopted by Canadian Unions).

Why we have International Workers Memorial Day

It's because while we remember and mourn the dead, as unions, we will continue to fight like hell for the living.

Globally, we remember the 2.3 million workers who die, the 1.2 million who are injured and the 160 million who fall ill each year from unsafe, unhealthy or unsustainable work and workplaces.

In Australia: Workers bear the cost of hazardous work It is workers, not employers, who overwhelmingly bear the costs of workplace injuries and diseases, an official Australian report has shown. The report by Safe Work Australia revealed three quarters of the costs of workplace injuries and diseases is borne by the injured workers themselves, with just 5 per cent borne by employers. (see Safe Work Australia Report).