Ms Ingrid Stitt introduced herself and then asked Ms Lorraine Quirke, the new president of the Industrial Deaths Support and Advocacy (IDSA) group, to speak. Ms Quirk welcomed the many workers, bereaved families and friends to the annual joint VTHC/IDSA event.  Ms Quirk  opened her address by saying,  'This day not only allows us to pause in a public way to remember all those who've been lost  -  but it gives us the opportunity to remind the community in general, that a life is too high a price to pay for earning a living. It reminds us that many people have, and will continue to pay that price unless there is more focus and investment on the prevention of workplace death and injury.'

Ms Quirke was followed by Brian Boyd, VTHC Secretary, who reminded people that earlier in the week Australia paused on Anzac Day to remember the thousands of young men who lost their lives in past wars – many of whom should not have died. Thousands of people lose their lives because of work and these too should have been prevented. Mr Tony Evans, ex-WorkSafe inspector then spoke of his own loss – the death of his wife due to mesothelioma – caused by exposure to asbestos while undertaking cleaning duties in a hospital: In Memory of Jill. 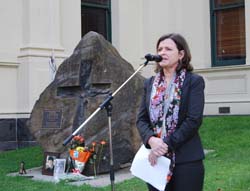 Ms Ged Kearney, ACTU President, told those gathered that we must also remember the thousands who lose their lives every year due to exposure to chemicals and work-related cancers, focussing on asbestos. She referred to the soon to be completed Asbestos Management review and urged the Federal government to move quickly on the recommendations.  Ms Kearney said that she too had lost someone close to her because of asbestos exposure, and re-iterated that the only solution, and that which is being proposed by the ACTU is a total, prioritised removal of all asbestos in Australia.


Ms Stitt then read out the names and circumstances of the 25 Victorians who lost their lives in traumatic workplace incidents since the last Workers' Memorial Day.

This was followed by the Victorian Trade Union Choir, which sang while 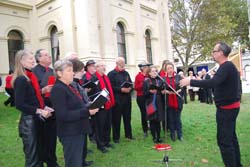 those present laid orange roses and wreaths at the base of the Memorial Rock. The songs performed by the choir were:

IDSA then invited those who were able to attend, to a morning tea, at which Ms Anita Aiezza, Manager, Occupational Hygiene at WorkSafe Victoria, spoke about the regulator's activities in the area of asbestos.