Some types of behaviour are considered especially inappropriate not only because of the effect on the victim, but the underlying attitudes of the perpetrators which give rise to such behaviours.

If a person is made to feel uncomfortable, unsafe, threatened, ashamed, inferior, excluded, embarrassed or humiliated because of their sex, gender, sexual orientation, or because they do not adhere to dominant gender stereotypes or socially prescribed gender role, this is considered gendered violence.

Here's a poster for HSRs to display in their workplaces to help them and their workmates identify workplace gendered violence. Click to download: 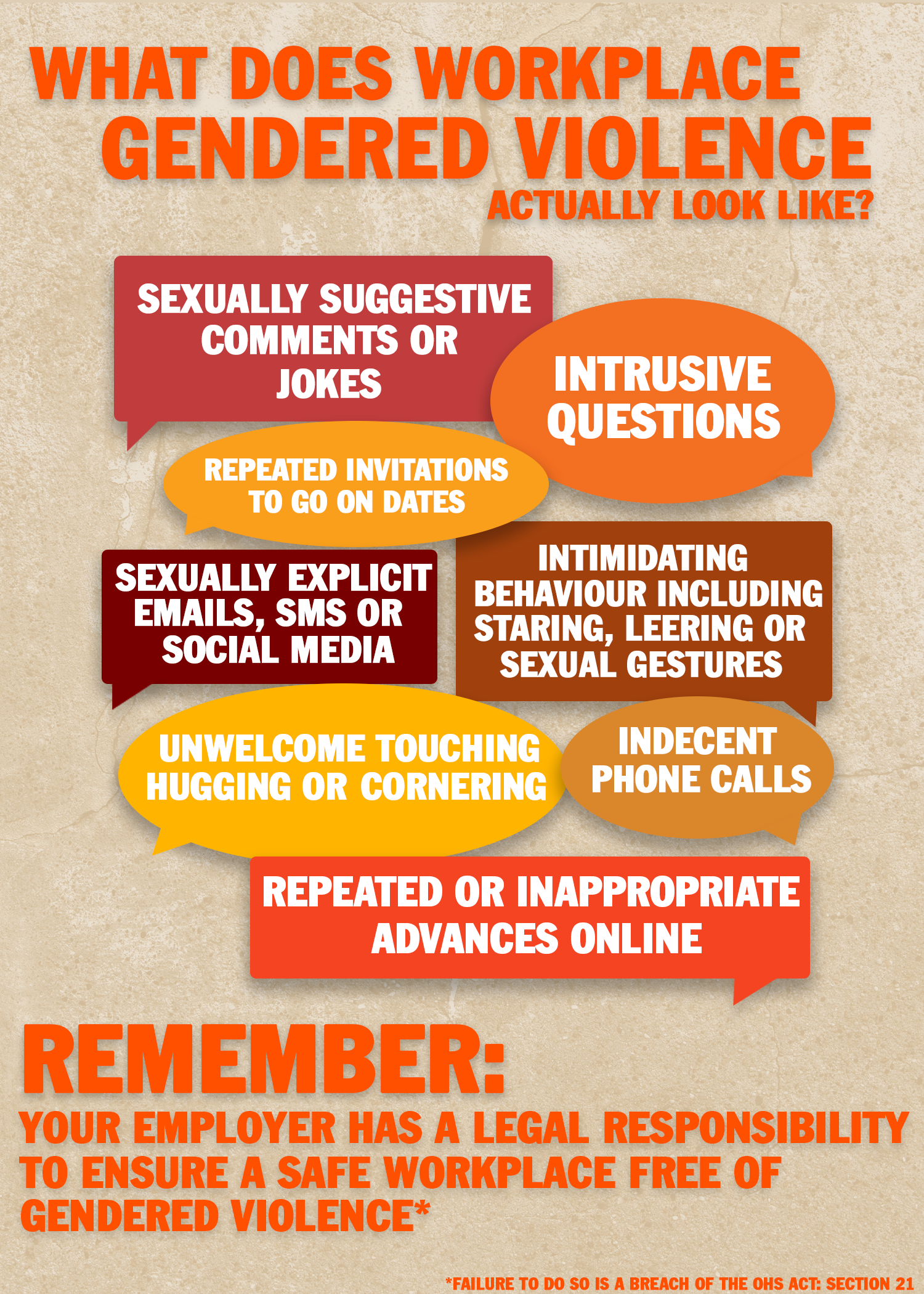 To help HSRs and workers better understand the risk of gendered violence in their workplaces, the Women's Team and the OHS Team at Trades Hall have developed the risk assessment tools below. They address the three areas which are likely to give rise to gendered violence risks: environment, work design and policies.

Section 21 of the OHS Act (2004) states that: "An employer must, so far as is reasonably practicable, provide and maintain for employees of the employer a working environment that is safe and without risks to health."

A workplace in which gendered violence is causing physical, sexual or psychological harm to a worker is clearly in breach of this. This locates the issue within an OHS framework, and therefore it can be dealt with like any other OHS issue.

If you're an elected HSR or deputy HSR, you can now enrol to do a specific Refresher course (on paid leave as it is an accredited course under s67 of the OHS Act).    To find out more about the Work-related gendered violence course, go here: Knowledge is power in fight against gendered violence

In March 2021, the Victorian government announced the establishment of a Ministerial Taskforce on Workplace Sexual Harassment to develop reforms to prevent and better respond to sexual harassment in workplaces. A key initiative of this reform program will be consultation on a mandatory incident notification scheme that would require employers to notify WorkSafe of workplace sexual harassment.  At the same time, WorkSafe Victoria launched a media campaign, Let's Be Very Clear (about workplace sexual harassment). Victorian Government media release. WorkSafe media release. Read more here

In March 2021, Comcare released workplace sexual harassment guidance to support employers, managers and supervisors, and workers with a focus on prevention, impacts and reporting.

The guidance was developed in collaboration with the Australian Human Rights Commission and should be read in conjunction with the national guidance from Safe Work Australia.

Employers must do what is reasonably practicable to manage the risk of workplace sexual harassment as part of their duties under the Work Health and Safety Act 2011. A workplace culture with a strong focus on prevention and early intervention is critical to influencing positive change.

Check out our live video on the topic from March 2019!

About this resource: To help HSRs and workers better understand the risk of gendered violence in their workplaces, the Women's Team and the OHS Team...
Read More